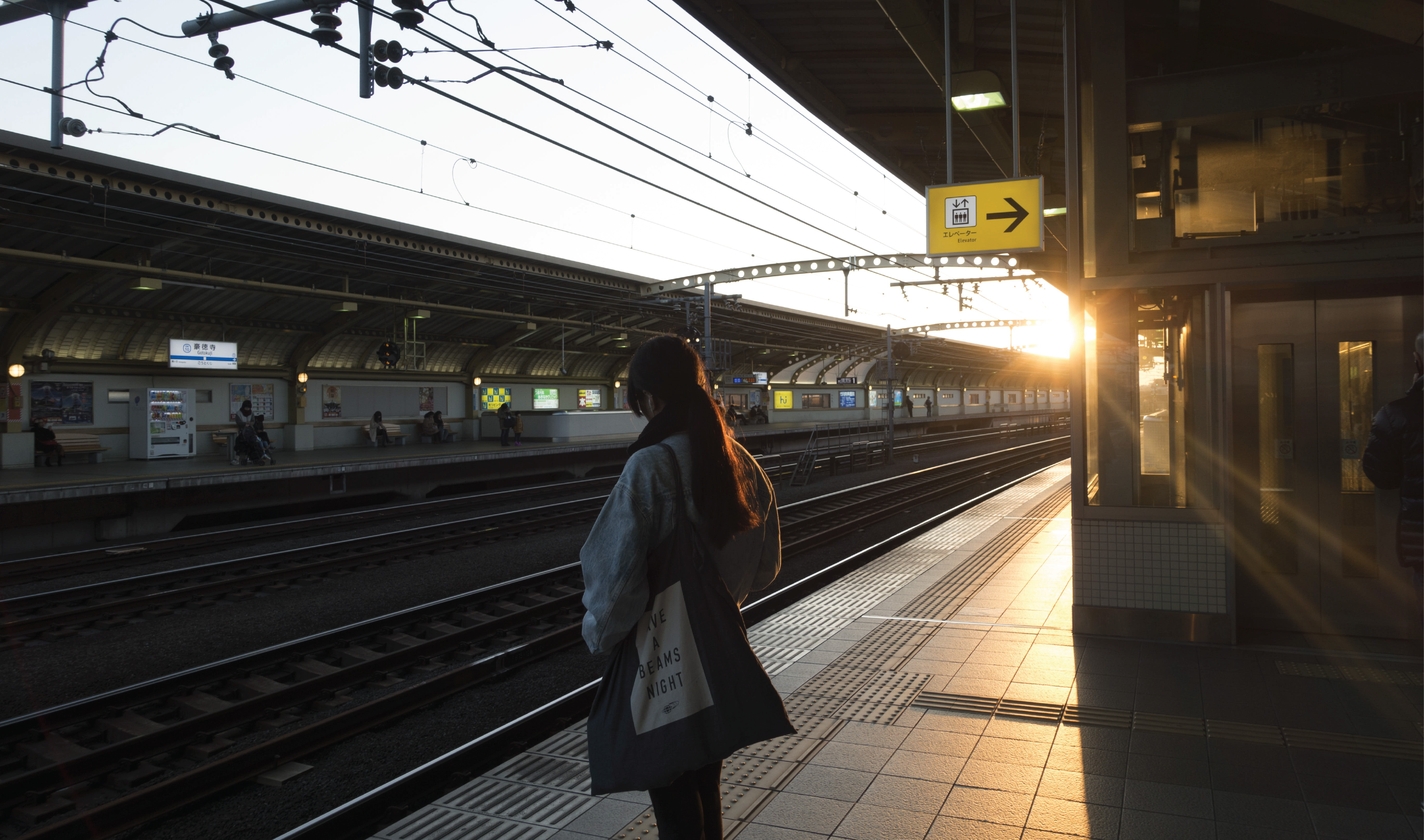 How employers can encourage travel behaviors beyond commuting

Commuter benefits are fringe benefits that firms give to workers to reduce the costs of commuting. The most common of these benefits — free parking — probably encourages employees to drive. In recent years, however, a growing number of state and local governments, such as Washington, D.C. and San Francisco, have passed laws requiring employers of a certain size to offer their employees commuter benefits for alternative modes of transportation (e.g., subsidies for transit or vanpool expenses, or a company-funded bus). These laws primarily aim to address environmental concerns and traffic congestion problems that are especially severe in city centers. These benefits could increase use of these alternative modes, and thereby increase environmental sustainability and social equity.

Despite the growing attention to commuter benefits programs, little is known about their comprehensive effects. Prior investigations have focused only on how benefits influence workers’ choice of commuting mode (e.g., does a transit benefit make them less likely to drive, and more likely to ride transit?). It is possible, however, that the effects of commuter benefits can extend beyond commute decisions, and even beyond workers. Benefit programs might influence how workers travel for non-commuting trips, or they might influence how other people in their households decide to travel. But these latter ideas remain largely unexamined.

My data came from the 2014 Puget Sound Regional Travel Survey (PSRTS) that collected information from approximately 12,000 individuals about how the region’s residents travel. The survey also collected information on household socioeconomics, and — crucially — on whether commuters were offered any of the following benefits: free/subsidized automobile parking, free/subsidized transit benefits, and commuter benefits other than parking and transit benefits (e.g., subsidies for vanpools, bike storage).

Figure 1. Availability of different types of commuter benefits in the final sample 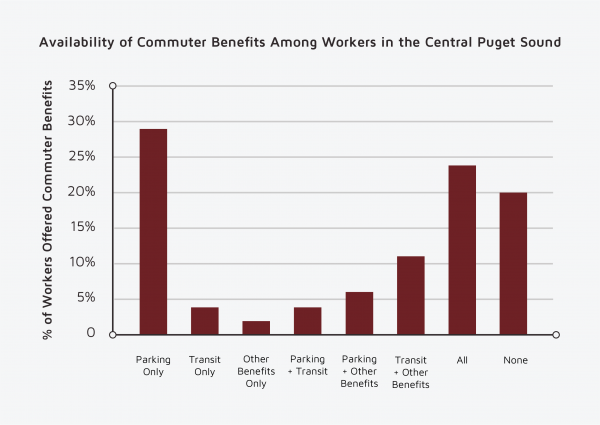 My findings support earlier research showing that workers with transit benefits are less likely to drive alone to work. My findings also support earlier research suggesting that workers with parking benefits are more likely to drive alone to work. Figure 2 reports the average changes in the probability of commuting by each transport mode when workers are offered a certain type of commuter benefit. On average, the probability of a worker commuting by transit increases by approximately 11% when that worker is offered transit benefits, whereas it decreases by approximately 8% when the worker is offered parking benefits. Being offered transit benefits also increases the average probability of commuting by carpool or non-motorized transportation, although the magnitude of these effects is much smaller. This is probably because those who do not drive to work can easily choose a different travel mode for each commute trip. For example, even if workers take transit to work to utilize transit benefits, their co-workers could give them a ride home after work or they may walk home for exercise. For those who drive alone to work, however, they are less likely to change their commuting mode after work because they need a car in the morning.

Figure 2. Average changes in the probability of commuting by each transport mode when a worker is offered commuter benefits 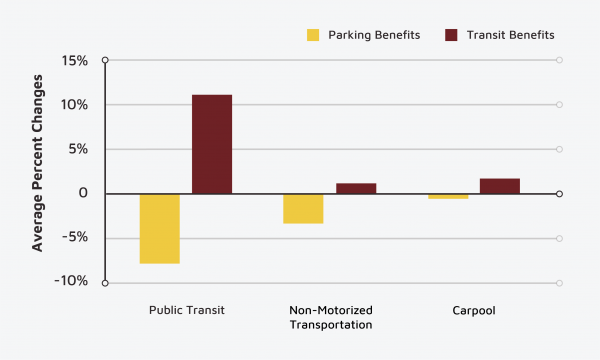 Employees with transit benefits drive less, not only for work but also for non-commute purposes.

Why would a commute benefit influence non-commute travel? One possible explanation is that a third of non-work trips still originate from the workplace. People might use their lunch break, for example, to run some errands or go to a medical appointment. It may be most convenient for workers making these trips to use the same mode they used for commuting (e.g., if you drove to work you are more likely to drive if you run out an errand). Similarly, non-commute trips are also frequently linked to commutes: people stop at shops or gyms or schools on the way to or from work. Such trip-chaining is much easier with a car, which may help explain why those offered parking benefits are more likely to drive for non-commute purposes. Finally, workers offered commuter benefits may also cultivate new non-commute travel habits. People who learn the bus or rail system because of a commuter incentive, for example, might realize they can use transit to reach other destinations as well.

At this point, readers might be wondering about the relative magnitude of the different types of spillover and direct effects of commuter benefits: how do they net out? Does a household with parking or transit benefits drive more or less than a household without those benefits? To answer this question, Table 1 reports the marginal effects — the association of workers’ own and other household members’ commuter benefits with typical workers’ driving distance. For example, offering a transit benefit to the average worker is associated with a decrease in daily driving distance by approximately three miles, about 72% of which is related to commutes.

Table 1 also shows that overall, parking benefits have a positive association with driving. Even though parking’s spillover onto other household members is associated with less VMT, that reduced amount of driving is more than outweighed by the increase in driving associated with the commuters themselves. The primary impact of parking benefits appears to be substantially more driving by the person who has them, which leads to more household driving overall. 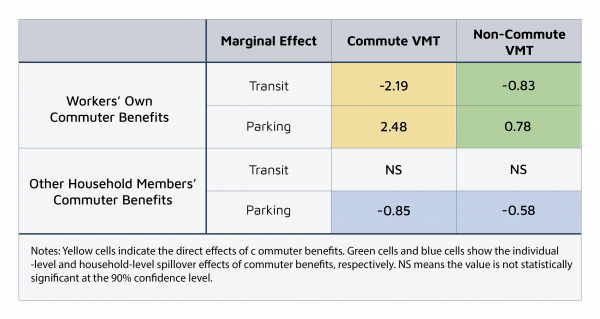 If commuter benefit programs also influence employees’ non-commute trips and the trips of other household members, then conventional evaluations might understate their impacts.

Moreover, as the positive association between parking benefits and driving distance remains almost the same after considering the spillovers between commute and non-commute trips and across household members, policymakers should discourage employers from providing parking benefits, or discourage employees from using the parking benefits they are offered. One potential strategy is to require employers to offer a parking cash-out, which is known to significantly reduce solo-driving among workers. For example, in 1992, California enacted a law mandating that some employers give their employees an option of a cash allowance in lieu of parking subsidies, and scholars have demonstrated that this has been effective in discouraging employees from driving to work.

Lastly, but most importantly, because my findings indicate that commuter benefits for transit use are more effective in reducing VMT than previously known, policies are needed to encourage more employers to provide such benefits. More than half of the 2014 Puget Sound survey respondents reported having no access to transit benefits (see Figure 1). Therefore, policymakers should develop tools, such as the provision of administrative or financial support, to urge more employers, especially those located in congested areas, to provide transit benefits.

Eun Jin Shin is an assistant professor of public administration at the Graduate School of Governance at Sungkyunkwan University in South Korea. She earned her Ph.D. in urban planning and development from the University of Southern California. She studies transportation policy and social justice.