With appropriate policies, TODs can solve both environmental and equity goals simultaneously

Transit-oriented development, also known as TOD, is a planning paradigm that favors dense mixed-use neighborhoods with storefronts and apartments clustered close to transit stations. TOD prioritizes pedestrian-friendly design and public transit, with streets built for people rather than cars. TOD is an increasingly popular strategy in American cities among planners who believe it can advance two important goals: an environmental goal of reducing greenhouse gas emissions, and a social policy goal of increasing access to opportunities for residents.

The idea behind the environmental goal is that people who live near transit will drive less and ride transit more, thereby mitigating the effects of climate change and air pollution. The idea behind the social policy goal is that access to public transit is especially valuable to low-income households, who are less likely to own personal vehicles. Building more housing near transit can boost access to jobs, schools, health care, and a range of other opportunities. Equity advocates often view TOD neighborhoods as ideal settings for affordable housing. Rightfully so, we believe. 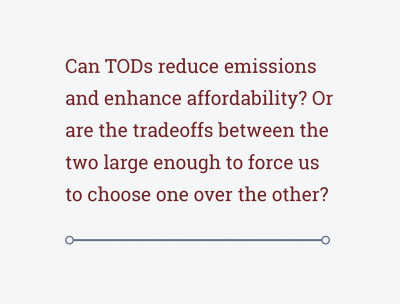 These two policy goals are distinct. The environmental goal of reduced greenhouse gas emissions hinges on driving less, while the equity goal of access hinges on TODs being affordable to the low-income people who depend on transit. Can we accomplish both goals? Can TODs reduce emissions and enhance affordability? Or are the tradeoffs between the two large enough to force us to choose one over the other?

If you’re unsure of the answer, you’re not alone. Planners have not been alert to the ways that emissions reduction and affordable housing goals can be in tension with one another, and as a result, relatively little research examines how they interact.

There is no direct way to answer these questions because no detailed data sets let researchers observe people as they move in and out of different neighborhoods. So we took a different approach and answered these questions using California Household Travel Survey data from four metropolitan areas: Los Angeles, Sacramento, San Diego, and San Francisco. Our goal was to compare the travel behavior of people in TODs to people outside them and to compare the travel behavior of people of different incomes within TODs themselves. (For most of our analysis, we defined “TOD residents” as those living within a half-mile of a rail station, and we defined “non-TOD residents” as those living farther away). By examining the differences between groups, and controlling statistically for a wide variety of other characteristics (e.g., race, education, employment status, household size, and so on), we could estimate what would happen, on average, if higher- or lower-income households had moved.

Table 1 shows our first set of comparisons: the average vehicle miles traveled by income and by TOD residence. 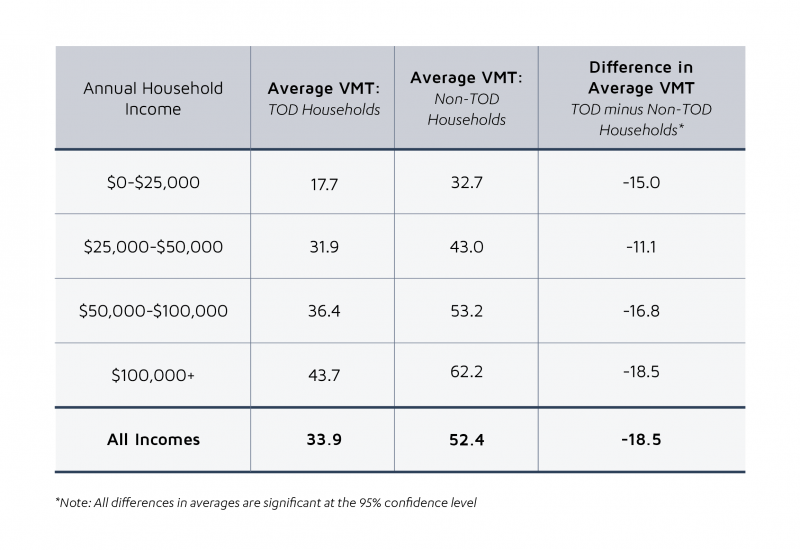 If the only goal of TOD were to reduce driving and hence reduce air pollution and greenhouse gas emissions, then this finding might suggest that planners should build TODs primarily for high-income households. After all, each high-income household represents a larger reduction in driving. Pursuing such a policy, however, would contradict the goal of prioritizing affordable housing near rail transit, and might even clash with many people’s conceptions of basic fairness. This contradiction would be particularly notable if, as we suspect, lower-income people in TODs rely on transit more.

Table 2 shows our comparisons of transit use broken down by income and by TOD versus non-TOD residence.

We see, first, that the lowest-income households use public transit more frequently than other households, regardless of location in a TOD. The relationship between transit use and income is more ambiguous than that between income and driving — it is not the case that more income always means less transit use — but on average, non-TOD households with incomes below $25,000 take twice as many transit trips as households with incomes of $100,000 or more. Within TODs, the gap is smaller, but the poorest households still take 30% more trips than the richest. Second, at every income level, TOD residents take substantially more daily transit trips than non-TOD households, with the largest increase occurring at the lowest income level. Thus, these findings suggest that if we want TODs to increase transit use and the accessibility benefits that TOD brings, we should prioritize the lowest-income residents for TOD residence. This conclusion, of course, is in direct tension with the finding we reported above — that TOD’s environmental goals will best be met by prioritizing the most rather than the least affluent.

The results in Table 1 suggest that households living in TODs drive less than households outside them, but provide little further detail. Those results, for example, do not distinguish between people who live just outside a TOD and people living 10 miles from one, even though we might expect that the former drives less (and uses transit more) than the latter. To address this question, we used an additional “linear” model to examine how driving behavior changes with distance from a rail station. We used these results to calculate the difference in average vehicle miles traveled for those living 1 mile from a rail station versus those living zero miles from rail, 2 miles versus 1 mile, and so forth. We made these calculations for the same income categories as above.

For households of any income level, the driving impact of living near rail declines sharply after 4 miles. This finding is consistent with other transportation research, which shows that rail transit produces the greatest effect for people living within 1 mile of a station. 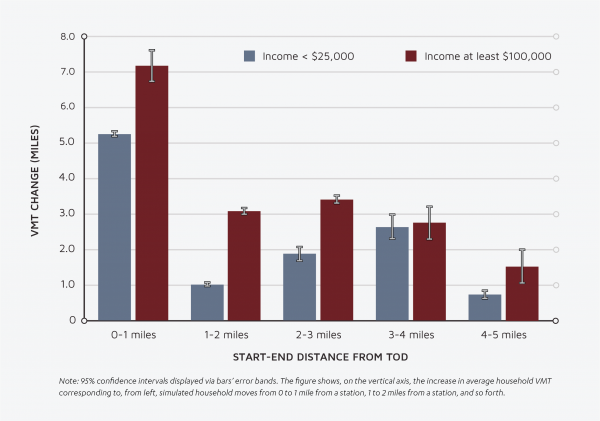 How can we put the findings above, some of them in tension with each other, together to inform TOD policy? On the one hand, TODs could most effectively meet the goals of reduced driving and reduced greenhouse gas emissions by attracting high-income households. It is these households that drive the most, and the biggest reductions in driving will, unsurprisingly, come from people who would have driven the most if they lived elsewhere. On the other hand, low-income households are more likely to use the transit TOD proximity offers, and likely benefit the most from increased access to jobs and other opportunities that transit provides.

In principle, nothing stops cities from attaining both goals. If cities create dense mixed-income neighborhoods, with ample supplies of both affordable and market-rate units that house a broad range of income groups, they can attain both their environmental and equity goals. 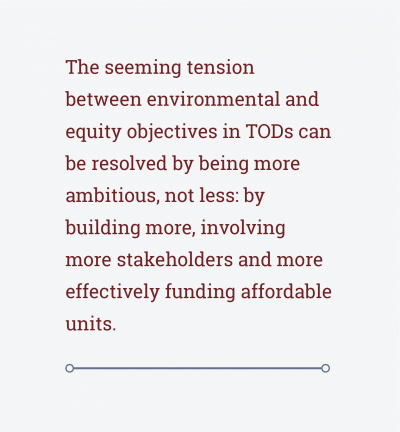 In practice, however, many cities don’t reach this happy medium. Zoning policies in many cities constrain the amount of housing that can be built near rail, and this artificial constraint puts TOD’s environmental and equity goals in conflict. Housing scarcity produces competition between the high-income households that reduce driving and the low-income households that rely on transit the most.

Since this problem is an artifact of poor zoning policy, it can be solved by changing the zoning. When TOD neighborhoods are upzoned, increasing the overall housing supply, it becomes easier to do both — to attract a mix of incomes that can robustly address both environmental and equity goals. This is not a new idea (Dan Chatman and his colleagues at UC Berkeley have made the same argument), but it is a good one. “Doing both” — building units in TODs that can attract high-income households while providing affordable housing — should be pursued through a combination of vigorous upzoning, substantial increases in affordable housing funding, and serious local involvement to ensure that planning caters first to long-term neighborhood residents, rather than newer residents. A focus on planning for long-time residents while also preparing for growth is particularly important in locations at risk of gentrification.

The seeming tension between environmental and equity objectives in TODs can be resolved by being more ambitious, not less: by building more, involving more stakeholders and more effectively funding affordable units. If cities commit to this approach, their TODs can achieve multiple goals. They can reduce greenhouse gas emissions, promote housing equity and transit access, and help advance or maintain affordability.

The views expressed herein are those of the authors and do not necessarily reflect those of the Board of Governors of the Federal Reserve System or other System officials.

Marlon Boarnet is a professor and chair of the Department of Urban Planning and Spatial Analysis at the USC Sol Price School of Public Policy.

Andrew Eisenlohr is the acting deputy chief operating officer for the University of the District of Columbia; he received his Ph.D. from the USC Price School of Public Policy.

Raphael W. Bostic is the president and CEO of the Federal Reserve Bank of Atlanta and was previously a professor at the USC Price School of Public Policy.

Seva Rodnyansky is an assistant professor of urban and environmental policy at Occidental College, where his research focuses on quantitative data analysis of housing policy, transportation planning, migration, and neighborhood change.

Hue-Tam Jamme is an assistant professor at the School of Geographical Sciences and Urban Planning of the Arizona State University specializing in comparative urbanism, mobilities, affordable TOD, and the digital economy.

Raúl Santiago-Bartolomei is a research associate at the Center for a New Economy in San Juan, Puerto Rico.