Identifying the factors that create safer driving can inform how we educate, license, and insure

If you’re on the road in Los Angeles, chances are you’ll see plenty of bad driving. According to the California Office of Traffic Safety, LA ranks third of 14 major California cities in fatal and injury vehicle collisions (and the top two are nearby Anaheim and Santa Ana). Teenagers and young adults are likely behind much of it — their age group statistically produces the most crashes, and it’s fair to expect a new driver to struggle more than an experienced one.

But of course, not all new drivers are bad drivers. Some novices behind the wheel quickly surpass their cohort in skill level. Are there demographic or cultural factors that make some people better at learning to drive?

LA’s Westside has some of the worst traffic bottlenecks in the United States. Learning and practicing in the area is especially challenging for novice drivers (and their instructors). Through our involvement in the Westwood Driving School near UCLA, we set up a study to test how different beginners performed on the roads.

We collected data on 50 females and 50 males who each had less than five hours of previous experience driving. The study was conducted during the course of regular lessons on the Westside, and all the subjects were taught and evaluated by the same driving instructor.

Prior to the start of the lesson, the students were asked to rate their confidence in driving. The instructor was blind to this rating. Their driving skill was then assessed during a two-hour lesson using the school’s 1-4 rating system — “1” being in need of much more practice and instruction and “4” being ready for the California Department of Motor Vehicles (DMV) road test.

At the end of the lesson, the students were informed of the study and asked for their consent to participate. Based on our anecdotal observations of students at Westwood Driving School and building on other studies, we hypothesized that students who participated in sports and/or played video games would be better drivers. To address these two points, we asked two questions:

Here’s what we found.

From the instructor’s point of view, there was no difference between the driving skill ratings of males and females (see Figure 1). However, females were initially less confident in their driving skills than males, and their confidence was associated with how well they drove — the more confident, the better the driving skill rating. This was not the case for males: Self-confidence was not correlated with skill level. Further, female drivers’ confidence was positively correlated with hours behind the wheel prior to the lesson — the more hours behind the wheel, the more self-confident the female driver. 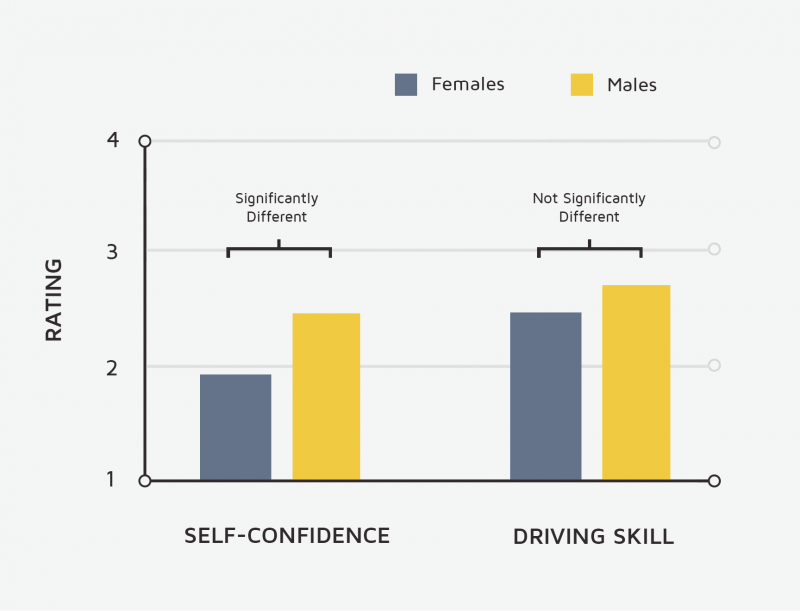 A surprising outcome of our study was that younger male novice drivers had a higher skill rating than older males new to driving. This counterintuitive trend was also present in female drivers but did not achieve the same level of statistical significance. In Figures 2 and 3, the downward trend lines show that for both males (Figure 2) and females (Figure 3) the older the novice driver, the lower the driving skill rating. However, this was only statistically significant for males (notice the steeper slope of the trend line). There are fewer than 50 visible data points because x-y coordinates of many values were identical and therefore overlapping, and the average age of novice drivers for both genders is 18. 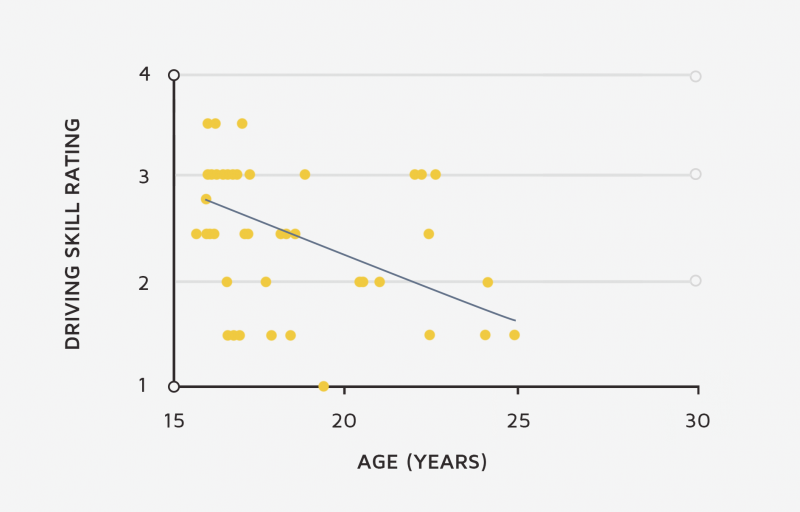 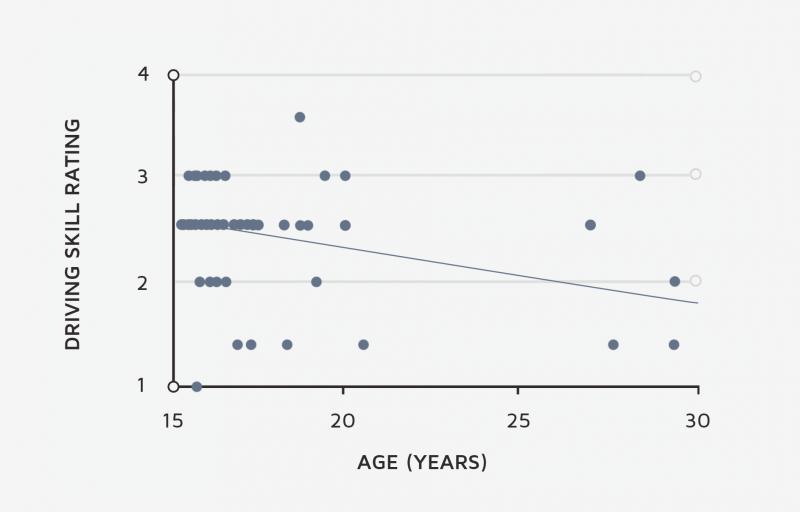 While our study did not determine why older novice drivers would exhibit a lower skill score, we can speculate that people in their early-to-mid-20s have a greater fear of negative consequences while driving than teenagers, and that this fear could lead to poorer driving skills — at least at the early stages of the learning process. This trend is especially pronounced in males. Research has shown that fear-related brain activity increases during adolescence, and suggests that this continues to increase into adulthood. Further, fearful drivers make more mistakes during on-road assessments compared to control drivers. It is possible that fear is what kept many of the older drivers from learning to drive when they were younger. 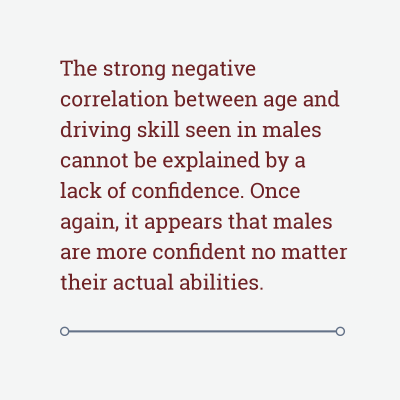 We also found that there was no significant correlation between age and self-confidence in males, but there was with females: The older the novice female driver, the less confident she was in her driving ability prior to the first lesson. Therefore, the strong negative correlation between age and driving skill seen in males cannot be explained by a lack of confidence. Once again, it appears that males are more confident no matter their actual abilities.

Earlier work with older adults has found that spatial cognition — one’s knowledge and understanding of the spatial environment — is an important element in driving competency. In our study, we were surprised to find that video gaming had no impact on driving skills in either males or females, as other studies have shown that playing action video games improves spatial cognition. We were not surprised to find that male novice drivers in the current study reported playing video games nearly four times more than females. However, this finding did not translate to any significant difference in driving skill between males and females. This was surprising given the positive relations in the literature between video gaming and spatial cognition, and between spatial cognition and driving ability.

One of our key findings was that practicing organized athletics of any kind (solo or team sports, either past or present) is associated with enhanced driving skills in both females and males (Figure 4). The subjects in our study played a wide variety of organized athletic activities, including team sports such as basketball, football, and soccer, and individual sports such as boxing, skateboarding, and swimming. Many of the driving students practiced more than one sport. The Westside of LA is a sporty place: Only 13 percent of our subjects did not participate in any athletic activity. 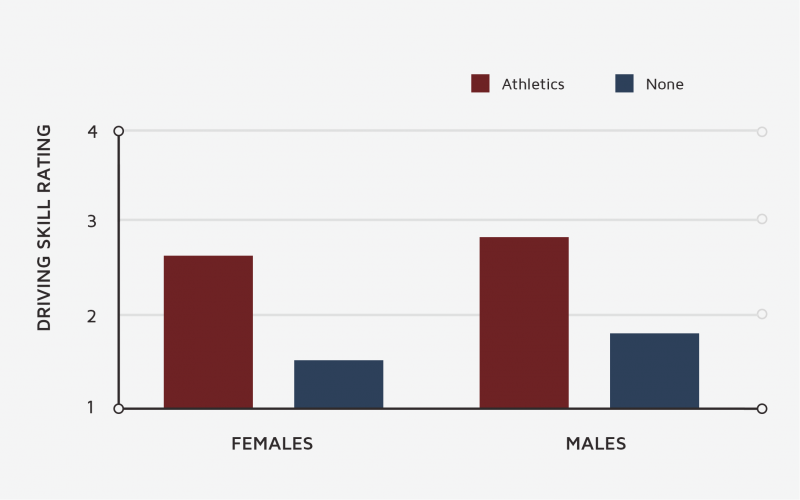 Previous research focused on “elite” team sports players (i.e. Division I athletes) found that, compared to controls (non-elite players), elite team sports players performed slightly better across certain driving skills. It’s quite possible that the control players were still athletic but just not elite, leading to less-than robust findings compared with our study featuring true non-athletes. Our study indicates that it is not necessary to play sports at an elite level to gain the benefits of sports including better driving — any organized athletic activity will do.

What is it about sports that is associated with better driving skills? There are two possibilities. Research suggests that people who play sports have better peripheral vision and spatiotemporal functions — the ability to process both space and time — compared to those who don’t, and that these functions can improve driving ability. Spatial cognition has also been shown to play an important role in driving competency in older drivers, and that skill can be learned and/or developed by participating in any kind of athletics.

Perhaps there is a causal relationship between sports and driving, where participating in sports confers skills in spatiotemporal and visual acuity that translate to the road. The other possibility is a non-causal, coincident relationship: that whatever innate skills attract someone to sports also make them better at driving. 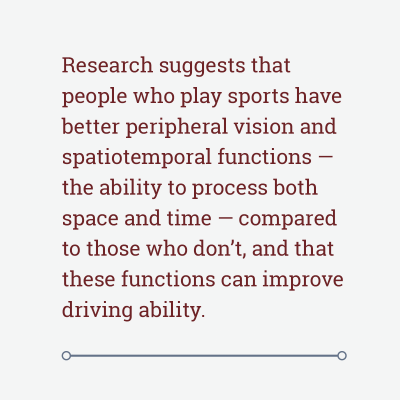 There are at least two different sets of driving skills that make someone a good driver: technical skills and safety skills. Technical skills include steering, reflexes, smooth braking and acceleration, ability to judge distances, and other measures of the driver’s ability. Safety skills measure situational and contextual awareness, including driver awareness of their surroundings, considerate use of turn indicators, obeying the speed limit, and not being distracted by cellphones and the radio. Safe driving skills require a commitment to safety over ability, and playing-it-safe is not something that teenage and young adult males are known for. Just because someone is a technically skilled driver does not necessarily mean they will be a safe driver.

The U.S. Department of Transportation reports that drivers aged 16 to 20 are involved in the greatest rate of fatal, injuring, and property-damaging crashes of any age group. Additionally, there are clear differences by gender in crash rates, with males crashing more than females at every age from 16 to over 74. This gap is especially pronounced at the youngest level.

We used the Westwood School’s driver evaluation system, which encompasses both technical and safety skills. While our study examined some of the factors that impact the overall abilities of novice drivers, crash statistics suggest that technical skill does not necessarily translate into safe driving practices on the road. A different study would be required to see how the factors we selected affect driver safety over time.

Our study was performed with a small group in a small area of one city, and we don’t know the extent to which its outcomes can be generalized. Nevertheless, the data provide important considerations for other geographical areas and for future policy and practice recommendations.

These findings bring us to two primary recommendations. The first concerns the car insurance industry. Currently, insurance companies ask about school grades when determining the cost of car insurance, with good grades typically lowering the insurance cost for a young driver. Based on our findings that involvement in sports is a leading indicator of good driving skills, perhaps insurance companies should consider offering a similar discount for drivers who participate in organized athletics.

Second, the lower driving skills seen from older novices suggest new ways to structure driver education requirements. In California and other states, anyone under the age of 18 is required to take formal driver’s education classes and a minimum of six hours of on-road driving instruction from a certified program such as ours in Westwood. Most areas of the country have eliminated free driver training in high schools, so students younger than 18 must take expensive private lessons. In California, they must also wait six months after receiving a learner’s permit before they are permitted to take the DMV Driver’s Road Test, making the licensing process for younger drivers significantly more expensive and time-consuming than it is for people 18 and older.

Does this age-mandated driver training really reduce crashes if it isn’t required of older novice drivers? Our study showed a negative correlation between age and driving skills of novices, especially males. Perhaps California and other states with graduated driver’s license programs could consider ending age-based mandatory driver’s education, and focus more on safety training for all novice drivers of any age.

Although our study does not definitively show that athletics or youth make novice drivers better at driving, these factors can aid in identifying and supporting safe driving practices early on in the licensing process. The more we know about the factors that improve how people drive, the more steps we can take to make the roads safer for everyone. Considering that traffic collisions are the leading cause of death for children between the ages of 2 and 14 in Los Angeles, this really is a matter of life and death.

Dr. Nancy L. Wayne is a professor of physiology at the David Geffen School of Medicine at UCLA.

Gregory A. Miller is an instructor at the Westwood Driving School in Los Angeles.