Skip to content
Transit Ridership at Bay: Reflections on the UCLA ITS Bay Area Transit Use Study

Transit Ridership at Bay: Reflections on the UCLA ITS Bay Area Transit Use Study 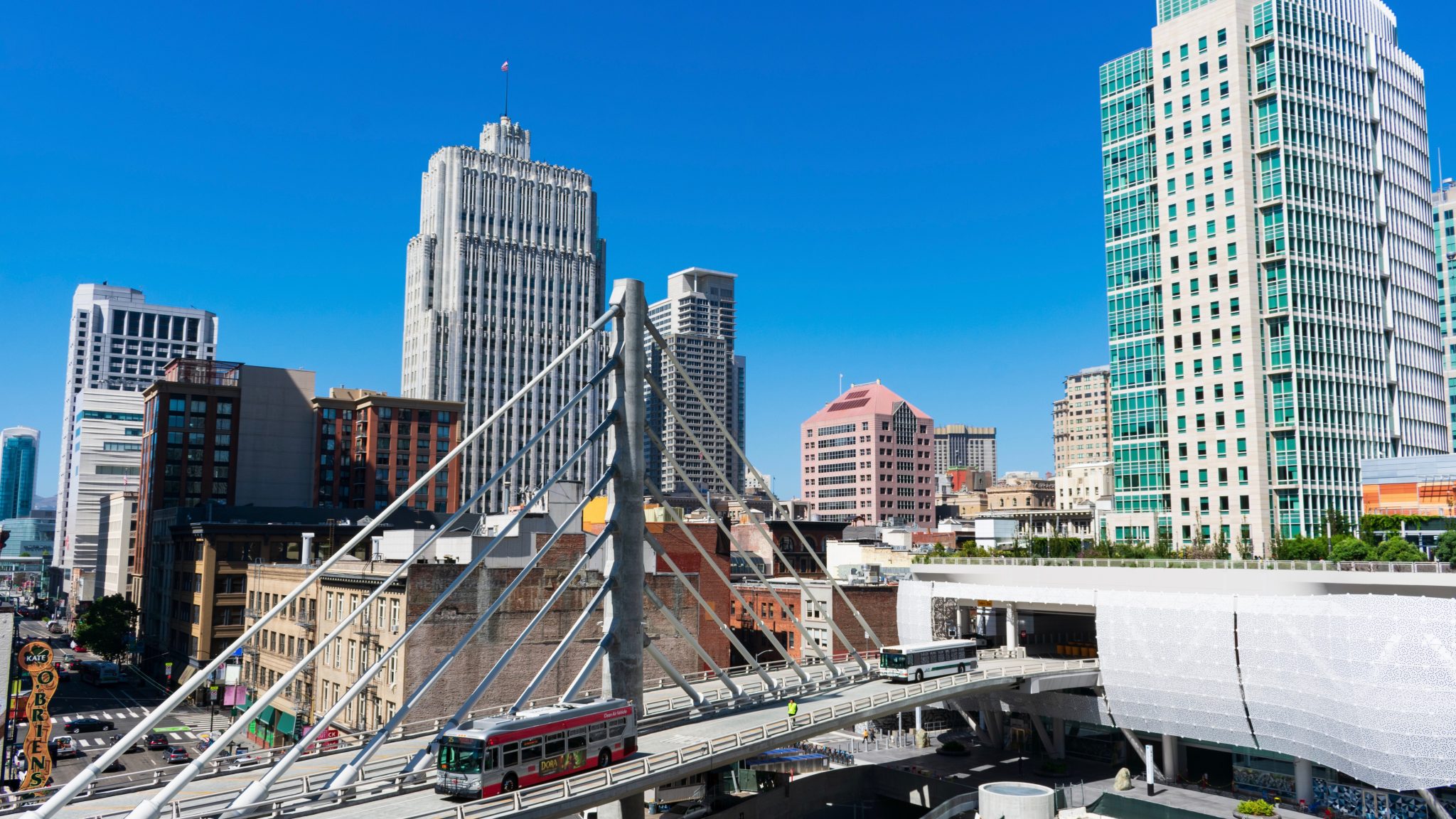 Since the onset of the coronavirus pandemic, American public transit faces a crisis. Transit use has plummeted 50 to 90% below normal demand — for good reasons rooted in public health and safety. Those who continue to ride include transit-dependent essential workers, who highlight public transit’s underemphasized social service role.

Admirably — and to the detriment of their finances — transit operators across the country have remained open while discouraging people from using their own service during the pandemic. However, not too long ago, operators were urgently seeking strategies to restore their falling patronage. If the ridership drop caused by the pandemic is a cliff, it lies at the bottom of a half-decade-long downslope.

Since the start of 2015, transit ridership has been falling nationally and in California. Researchers, agency staff, and commentators proposed many possible reasons, from service cuts to declining gas prices to the rise of ridehail services like Uber and Lyft. Two years ago, I joined a team at UCLA working to understand these trends and the factors behind them.

My research focused on ridership trends in the San Francisco Bay Area. At one time, the Bay Area — home to a white-hot regional economy and the most transit-friendly city west of the Mississippi — appeared to have staved off the ridership losses of other American cities. But starting in 2017, transit use there, too, began to fall. In just two years, 2017 and 2018, the region lost 28 million annual boardings, a 5.2% decline. 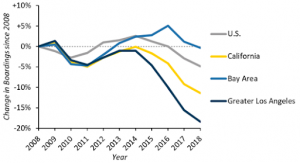 Anyone from the region would readily tell you that the Bay Area is unique — and especially different from Los Angeles (where transit ridership losses have been steep). But are the Bay Area’s transit use trends and the causes behind them exceptional or just a delayed case of the same factors at work elsewhere?

We did find differences in the Bay Area from elsewhere in California, at least. But, absent policy intervention, these dynamics may represent the future of transit in many high-cost American metropolitan areas.

For instance, the region’s steepest ridership losses have come on buses, at off-peak times, on weekends, in non-commute directions, on outlying lines, and on transit operators that do not serve the region’s core jobs clusters. These data indicate that Bay Area transit trips are increasingly commute-focused, particularly into and out of downtown San Francisco.

Indeed, the parts of the region’s transit network focused on the commute masked earlier declines elsewhere and propped up total regional ridership. Without these trip types, Bay Area transit trends would look more like the rest of the nation, with earlier, broader declines.

In tandem, the people who take transit have changed. While still skewing lower-income, the region’s ridership increasingly comes from so-called “non-traditional” transit users, such as those with higher incomes and greater automobile access.

We examined many possible reasons for these trends. Unlike UCLA ITS’ earlier study of Greater Los Angeles — which identified rising auto access as the key factor behind the region’s transit patronage decline — the data did not reveal an obvious single culprit.

We ruled out changes in service (service supply has actually increased), fares, gas prices, spending, and passenger satisfaction issues as causes of the ridership slump. Private shuttles (“Google buses”) and driver’s licensing for undocumented immigrants may be playing a minor role, but not at a scale to explain the drop. 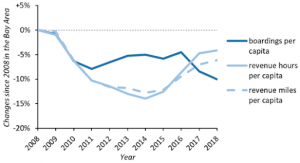 Service Changes Are Not behind Ridership Changes in the Bay Area—In Fact, Service Supply Is on the Rise as Ridership Falls

Yet some major candidates did emerge. Perhaps the starkest is the growing jobs-housing imbalance in the Bay Area. Amidst the region’s severe affordable housing crisis, the average commute distance has grown as employment and residences have grown farther apart.

This helps explain not only overall ridership losses — as trips grow longer, transit becomes less competitive with driving — but also the particular declines in non-work transit trip types. As more people live in less transit-friendly parts of the region, they are less able and less likely to use transit for errands, socializing, and other non-commute trips near home.

We also found strong circumstantial evidence that ridehail is substituting for some transit trips, particularly in the off-peak. Though ridehail and transit often serve somewhat different travel markets, it is in exactly those markets, such as nights, weekends, and shorter non-commute trips, where transit is most losing ridership. Other research has found that Uber and Lyft substitute for transit more the longer they operate in an area — and they have operated in the Bay Area longer than any other region.

What I most appreciated about working on this study was the many perspectives, disciplines, and analytical techniques the other members of the team brought to bear. Being able to incorporate analyses of housing, employment, demographic patterns, and even driver’s licensing policies strengthened the final report and highlighted the sometimes overlooked importance of factors outside the transit network itself.

Along those lines, reversing the decline in transit use in the Bay Area may be difficult for transit operators, as it appears to stem from factors outside their control. Addressing factors beyond transit itself, like the region’s jobs-housing imbalance, affordable housing crisis, and ridehail boom will be key to restoring ridership, especially off-peak trips.

The transit ridership slump of the past five years and especially the more recent drop in the Bay Area may now seem unimportant in light of the much larger drop of the past few months. Yet the longer-term issues behind the former — some unique to the Bay Area, others shared with cities nationwide — will still be at play after the pandemic and will determine whether and how transit can recover.