Skip to content
Dreams of utopia: The future of AVs

Dreams of utopia: The future of AVs 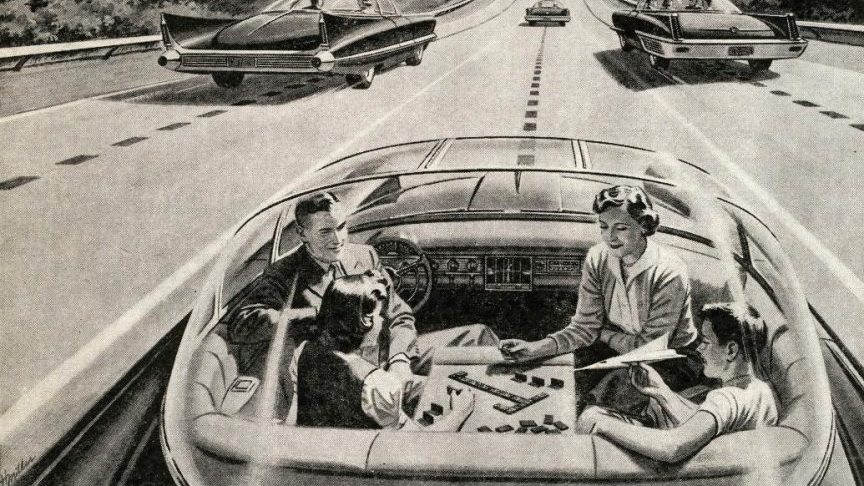 Earlier this week, UCLA’s own Ryan Snyder — a lecturer on transportation planning at UCLA and principal at Transpo Group — hosted a conference focused on autonomous vehicles. I was fortunate to attend, because as a newcomer to the field of transportation planning and a self-described technological luddite, I found the day spent learning about cars that drive themselves to be an unexpected delight.

For instance, did you know that:

The world of autonomous vehicles is at once tangible, and distant. These industry leaders are thinking about self-driving cars across a few key axes:

Connected and autonomous. Autonomous vehicles use sensors to evaluate their external environment and respond accordingly. Connected vehicles use these same sensors, but also communicate with other vehicles on the road, and send and receive data from waypoints along the road, including information on traffic patterns or emergency vehicles. Connected autonomous vehicles open up a new world of possibility: dynamic pricing by lane, based on traffic patterns; obstruction-free routing of emergency vehicles; and “platooning” of trucks or passenger vehicles for enhanced efficiency and safety.

It has to be electric. Cars that drive themselves make time spent in the car commuting a whole lot less painful. Autonomous vehicles will invariably induce demand. Transportation is California’s highest emitter of greenhouse gases. Electric vehicles not only dramatically reduce carbon emissions, but they are easier to maintain and last longer: about 500,000 estimated miles, versus 150,000 for a gas-powered car. And electric vehicle technology has a bright future. Solar-powered roads have already been piloted (albeit not especially successfully), and new wireless charging could make electric vehicle charging stations a thing of the past.

Sharing is the future. The private automobile is not only unsustainable, but it contributes to anomie and social isolation. Lyft has begun to redirect users to shared services on the landing screen of their app. In planning for future policy, the LA Department of Transportation recognizes the need to give priority to services that incentivize shared rides. And transportation engineering firms like Stantec have designed and piloted autonomous shuttles to meet first and last mile transit needs that municipal bus routes might overlook.

Equity matters. Dake Wilson put it best: “Cars are profoundly inequitable.” Those with the means to afford a car (and yes, many poor people own cars too) can pay for the mobility that cars provide. But the gap between car-owners and non-car owners presents a huge opportunity gap. As Anne Brown and Brian Taylor write in a chapter from the new book Three Revolutions, “Unequal access to automobility manifests in fewer trips and miles traveled by low-income compared to higher-income households.” The question remains, will this autonomous future close this mobility gap between those who can afford cars and those who cannot? Equity issues manifest in terms of differently-abled people as well as low-income people and households. While ride-hailing services today, in theory, can provide more on-demand service than existing dial-a-ride paratransit, many people are concerned discrimination still exists. In fact, California Senate Bill 1376, currently on Governor Brown’s desk awaiting signature, is trying to ensure greater accessibility requirements for transportation network companies.

The future of automated mobility is near. As Ryan Snyder presaged, “this is all new…there will be many unforeseen consequences that we haven’t talked about, but what’s important is that we start the conversation now.” This conversation will dictate whether autonomous vehicles further inequity in a dystopic, car-centric world; or if they create community, enhance efficiency, and bring us Angelenos a step closer to the utopia we’ve long been promised.