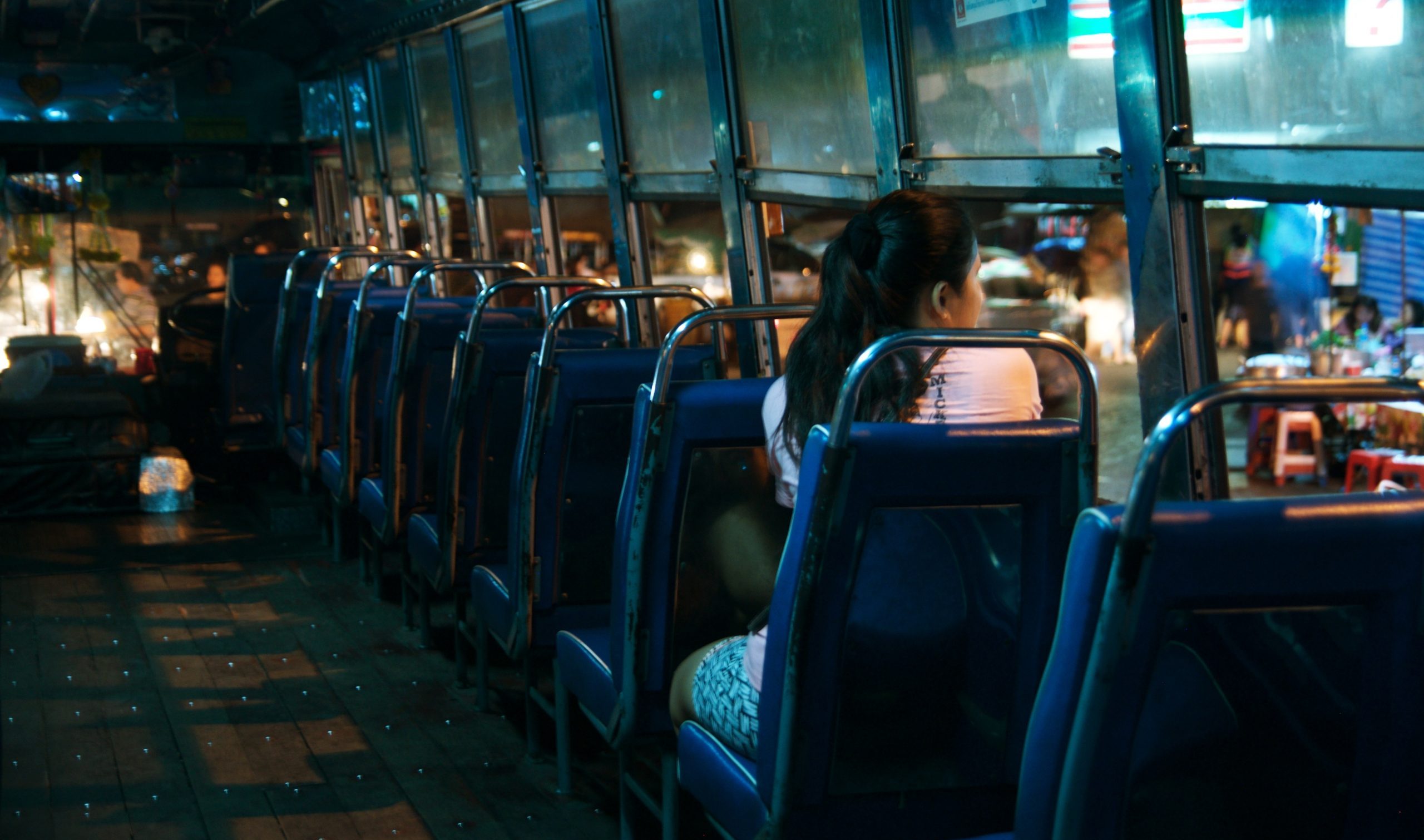 “Pssst, Babe, Will You Ride the Bus with Me?”

Years ago, as a teenager and young woman in Athens, Greece, I was always vigilant when using public transit. Catcalling at bus stops was an unfortunately common, even normalized, occurrence. Groping and inappropriate touching on overcrowded buses was frequent. So, too, were the precautions I and other women and girls took — choosing to walk rather than ride (in a compact city like Athens, this was often doable), finding a spot on the bus that allowed you to have your back against the wall, or placing a bag or backpack strategically between your body and fellow passengers. Such precautionary behaviors were intrinsic to most young women’s transit trips in Athens. Little did I know at that time that sexual harassment and its associated precautionary responses are unfortunately an almost universal experience for women around the world.

Sexual harassment involves unwanted sexual attention. It can be verbal (e.g., lewd comments, sexual invitations), physical (e.g., groping), or neither (e.g., leering, stalking, indecent exposure). Riding transit often generates conditions that offer opportunities for harassment. Criminologists have long argued that crime is largely opportunistic, and that certain environments have physical and social characteristics that enable it. An overcrowded bus, for example, offers ample opportunities for groping by providing both proximity and anonymity. Crowded buses have plentiful potential victims, and the crowded conditions protect the harasser from identification. Conversely, the absence of crowds at dark and desolate bus stops makes it easier for a perpetrator to expose himself to a sole rider waiting for a vehicle.

Riding transit often generates conditions that offer opportunities for harassment. An overcrowded bus, for example, offers ample opportunities for groping by providing both proximity and anonymity. Conversely, the absence of crowds at dark and desolate bus stops makes it easier for a perpetrator to expose himself to a sole rider waiting for a vehicle.

We have good reason, then, based on both theory and anecdotal evidence, to think that harassment on transit is common. Relatively little research, however, examines just how common it really is, and how it varies among cities and transit riders. These were the overarching questions that criminologist Vania Ceccato from Sweden’s Royal Institute of Technology and I set out to examine. With the help of researchers worldwide, we distributed a web-based survey to college students in 18 different cities around the world: London, Milan, Paris, Lisbon, Portugal, Stockholm and Huddinge, Sweden, in Europe; Los Angeles and San Jose, California, Mexico City, and Vancouver in North America; Bogota, Colombia, Sao Paulo and Rio Claro, Brazil, in South America; Guangzhou, China, Manila, Philippines, and Tokyo in Asia; Melbourne in Australia, and Lagos, Nigeria, in Africa. We focused on college students because their age group typically experiences higher levels of sexual harassment in public, and because it was easier to reach them through their universities. Also, in many cities (and certainly in the U.S.), college students ride transit more than the general public.

Our survey included 45 questions and received 11,710 responses. The questions were intended to find:

We also wanted to know if the built or social environments of transit settings were exacerbating our respondents’ fears: did certain transit stops, for example, make them feel vulnerable? If so, what would make them feel safer?

In this article, I summarize our findings, with particular emphasis on findings from two California cities — Los Angeles and San Jose.

We found that harassment is common, even omnipresent, in the transit environments of all cities studied, but the type of harassment experienced varies considerably from one city to another. Women were much more likely than men to say they had experienced sexual harassment, although in every city a sizable minority of male students did report being harassed (Figure 1 and Figure 2). 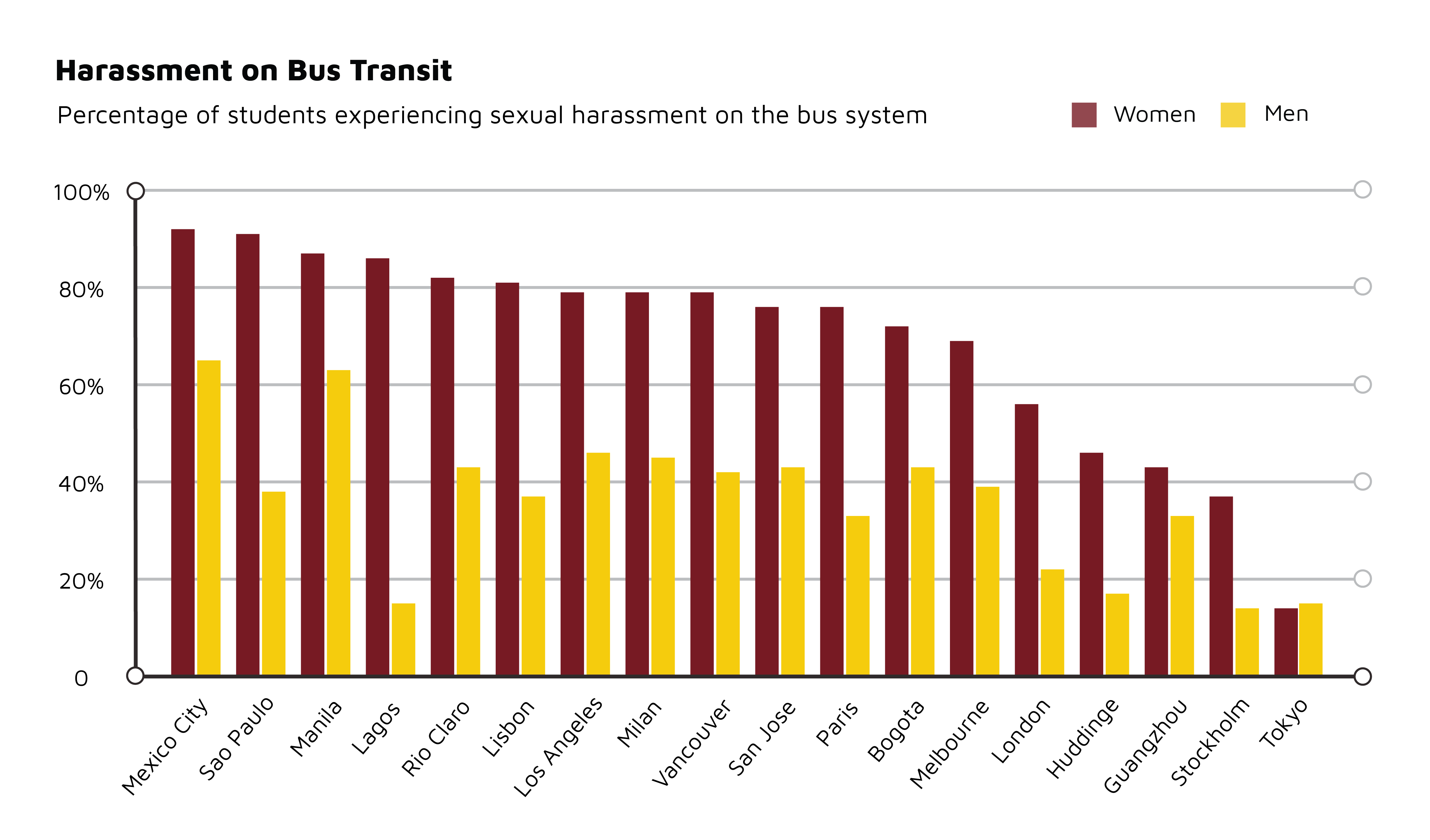 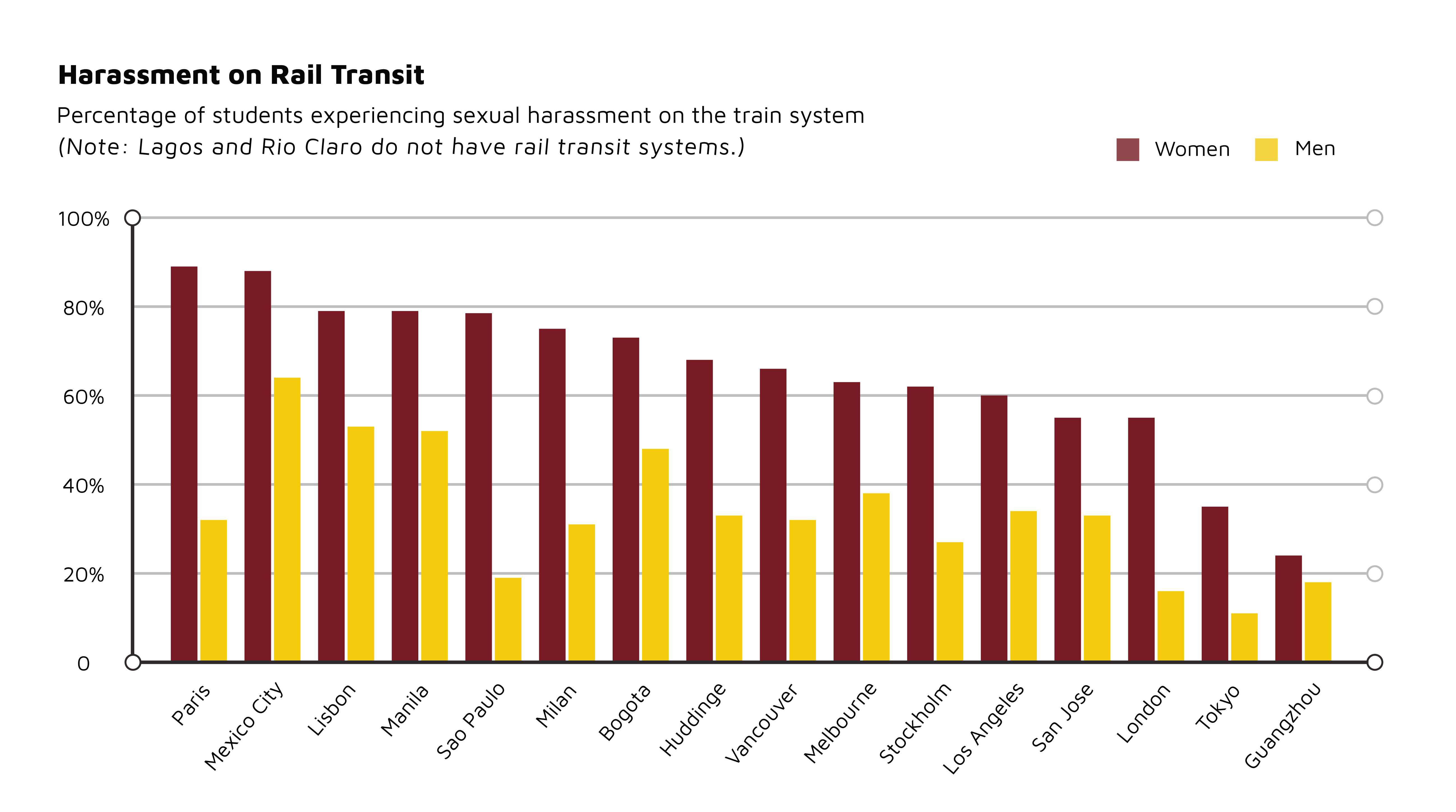 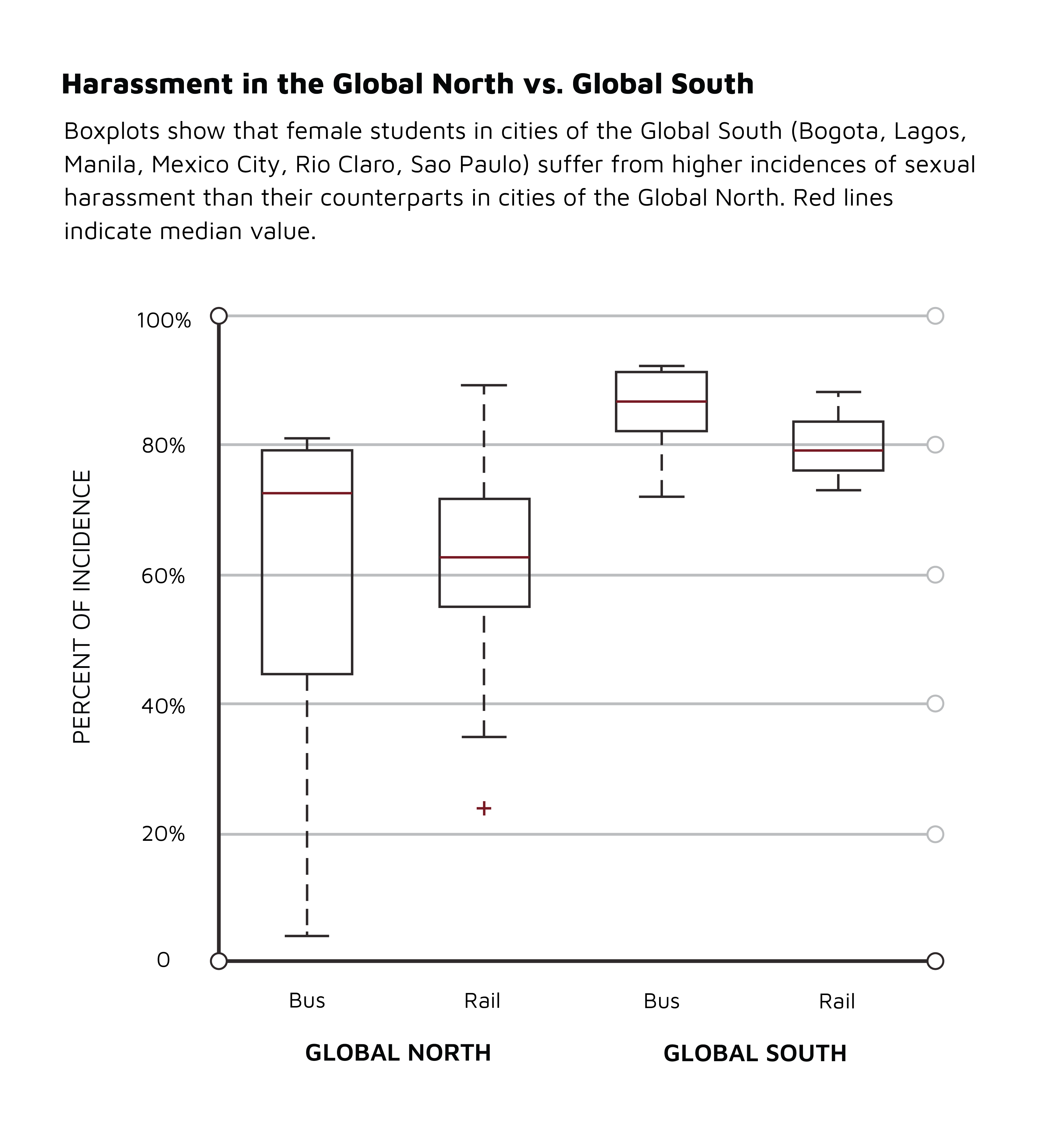 Some kinds of harassment are more prominent than others. In all cities and transit environments, verbal harassment — particularly catcalling, obscene language, and whistling — along with sexual looks and gestures, were the most prominent harassment behaviors our respondents reported. It is interesting to note, however, that some students did not perceive catcalling as sexual harassment, despite its clear sexual overtone. (We return to this point below.)

While more invasive physical harassment was less common, its most common form was groping, which primarily took place inside transit vehicles. Physical harassment in general was more common on vehicles. We found that women face harassment throughout their entire transit journeys — on their way to the transit stop, at the stop, and on the vehicle — but that most physical harassment occurred during the ride itself. In Mexico City and Sao Paulo (the two cities with the highest level of harassment on their bus systems), one-third and one-fourth of female respondents, respectively, had experienced groping on both buses and trains. On the other hand, only 9% and 7% of female students in Los Angeles and San Jose, respectively, reported groping on the bus, and only 4% of female students in both cities reported groping on the train (Figure 4). About one-fifth of the female respondents in Huddinge (20%) and Stockholm (17%) experienced nonphysical/nonverbal harassment. 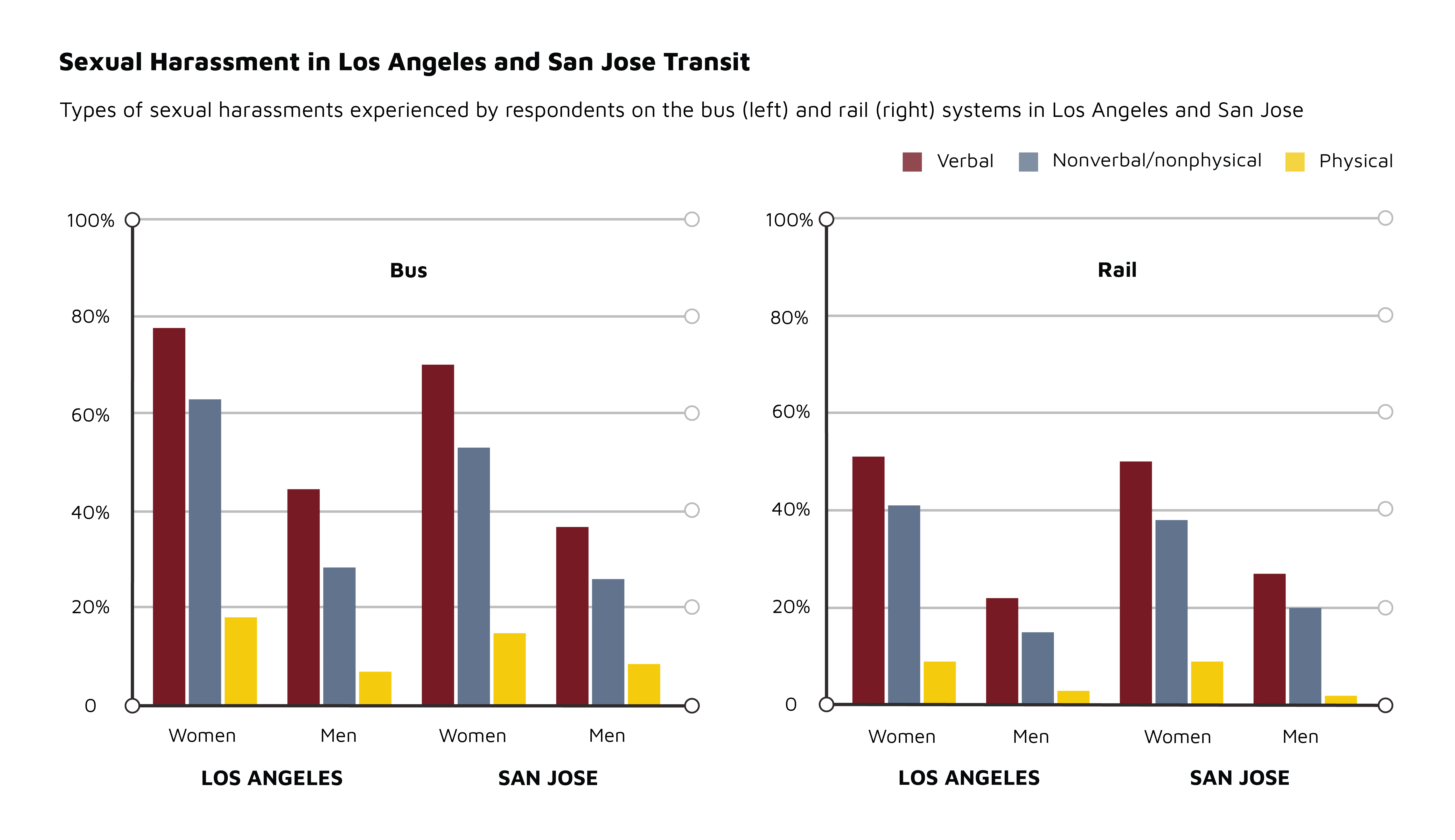 Thus far I have only discussed differences in harassment levels based on gender. Harassment, however, can be directed at people because they identify as LGBTQ+. Because some countries do not allow survey inquiries about the sexual orientation of respondents, we were only able to examine the relationship between sexual orientation and sexual harassment in 11 cities. In nine of these cities, LGBTQ+ students reported higher rates of harassment than heterosexual, cisgender students. The differences, however, were not statistically significant in about half of these cities. That lack of significance may owe to the small sample size of LGBTQ+ students in our survey, as well as the fact that sexual orientation or gender identity is often not visible to outsiders (i.e., some riders who would have been harassed if perpetrators knew they were LGBTQ+ were not harassed because their orientation or identity was not evident)

The importance of the environmental context

Students revealed that physical problems often plagued the transit settings where they had experienced harassment. These settings were dark, desolate, littered, or had vandalism and graffiti. Respondents also complained about the social environment of transit settings, such as the presence of drunk people, pickpockets, and people selling or exchanging drugs. In Los Angeles, respondents who reported the presence of drunk people and panhandlers in transit settings they frequently used were also more likely to report experiencing sexual harassment in these settings. Additionally, L.A. students who encountered vandalism or litter on the train system, or who used poorly illuminated bus stops, also reported a higher risk of sexual harassment.

How does harassment change student behavior?

Past experience with transit harassment, or just a general awareness and fear of such harassment, can prompt transit riders to adopt precautionary measures, like I did growing up in Athens. This can result in avoiding transit at certain times or places, or using it only under certain conditions, such as if accompanied by others. These behaviors were significantly more common among female than male students in all cities. One of the most common precautions among female respondents worldwide was dressing in a way they believed would avoid sexual looks and harassment; in Tokyo and Guangzhou, more than half of the female respondents reported dressing to avoid unwanted attention. In certain cities, some female students reported carrying an object they could use as a deterrent or weapon against harassers (e.g., keys, sharp objects, pepper spray). Many female students also reported seeking seats near the bus operator, or choosing to wait for buses only at well-lit bus stops, even if this meant walking further to reach them. More than half of the female students in Los Angeles felt the need to either dress a certain way, travel only during daytime, or wait for the bus only at well-lit places. In San Jose, about one-quarter of the students reported traveling only during daytime and waiting for the bus only at well-lit bus stops, while a bit over one-fifth of them reported dressing a certain way to not attract attention when riding the bus.

See something, don’t say something

While harassment is both omnipresent and consequential, in that it affects whether and how people ride transit, it is also woefully underreported. In almost every city we studied, more than half of the respondents who experienced sexual harassment did not report it. In some cities, such as Rio Claro, Los Angeles, Mexico City, and Stockholm, fewer than 10% of the students reported the incidents they experienced. Most of those who did report an incident only told family and friends, not transit nor police authorities. Students across all 18 cities gave similar reasons for not reporting sexual harassment: embarrassment; perceived difficulty of reporting; not knowing where or how to report; believing that reporting was futile because nothing would be done; and, in some cities (Los Angeles among them), distrust of the police.

Another potential reason for underreporting was that, as mentioned earlier, not all students perceived catcalling as sexual harassment, despite catcalling’s clear sexual tone. This perception indicates a certain level of problematic normalization and tolerance of inappropriate sexual behavior in transit settings. Sadly, students in all cities also reported that in cases where bystanders had observed their sexual harassment, they largely chose not to act.

Sexual harassment on transit is a global, omnipresent phenomenon. It affects some riders enough to impede their mobility, make them anxious about their trips, take precautions or avoid transit altogether.

What can be done?

Sexual harassment on transit is a global, omnipresent phenomenon. It affects some riders enough to impede their mobility, make them anxious about their trips, take precautions or avoid transit altogether. While universities and workplaces have launched protocols and formal policies to tackle sexual harassment, especially after the reckoning that came with the #MeToo movement, much less change has happened in transit environments.

But there are actions that can be taken. Many of the students we surveyed suggested installing better lighting and digital timetables at bus stops, which allow transit riders to better plan their trip and wait times. Some also suggested making transit service more frequent to minimize both long waits at bus stops and train platforms and overcrowding during rush hours. Others asked for “request-stop programs,” which allow passengers to exit the bus closer to their destination during late-evening hours.

These suggestions are first steps that transit operators can take, but a phenomenon as pervasive as sexual harassment needs to be tackled through strategies that include multiple stakeholders and involve research, design, and policy action. Transit agencies should:

Cities and states should also adopt formal resolutions and mandates against sexual harassment. In August 2022, the California Legislature passed Senate Bill 1161 mandating the development of a survey that all transit agencies around the state should use to “inform efforts to improve the safety of riders and reduce street harassment on public transit.” This is a first necessary step, but much more needs to happen. Indeed, responding to harassment should be a multipronged strategy that not only involves research and data collection but design and public education actions, and the employment of digital technologies (apps) for easier reporting of crime. Transit agencies that take SB 1161 seriously should consider these policies, thus making transit a safer place for all those who rely on it.

Gekoski, A., Gray, J.M., Adler, J.R., & Horvath, M.A.H. (2017). The prevalence and nature of sexual harassment and assault against women and girls in public transport: An international review. Journal of Criminological Research and Policy, 3(1): 3-16.

Anastasia Loukaitou-Sideris is a distinguished professor of urban planning and interim dean of the UCLA Luskin School of Public Affairs. Her research focuses on the public environment of the city, its physical representation, aesthetics, social meaning and impact on the urban resident.

Where You Go When Your Car is Home

A Nudge Toward Greener Flying